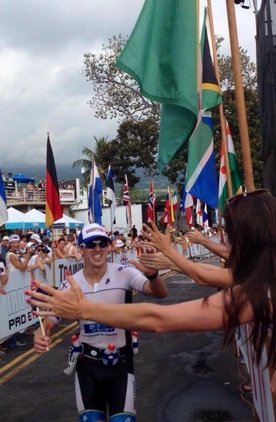 What year was your first triathlon?

Favourite Race: And Why?

Ironman World championship in Hawaii. Why? Does it get any better?

Dream Race: And Why?

Bucket list race include; Challenge Roth, Escape from Alcatraz, Alpe d’Huez Triathlon, 70.3 world Championships in 2016 at the Gold Coast and Noresman Triathlon to name a few.


How do you push through the pain:

Knowing that I won’t be happy with myself at the end of the race if I don’t give it my all.

Lance (only if he tells the truth), Crowie (to pick his brain for some tips), Rob Harvey (best footballer of all time), Tim Ballintine (so I can use his Normatic recovery legs and hopefully get a gig on his blog again)

“In the end we only regret the chances we didn’t take.”

You’re the CEO of the World Triathlon Corporation, what is your first order of business?

Keeping the field at the Ironman World Championships manageable and going back to a mass start with everyone including the pro’s.

The rest is undecided at this stage.